I wish I could get some Frango Mints from Marshall Fields for dessert. Grandma always came for holiday visits with Frango Mints packed in her suitcase.

My mom, grandma (Juney) and me

Juney (Grandma) used to work at Marshall Fields (after the Community Kitchen closed in 1951). She ran the Health Food Counter.  Mom took us to visit Marshall Fields every year.  I remember the magic of the Christmas windows and walking down State Street and Michigan Avenue bundled up — Mom in her fur coat.

The day after Thanksgiving, we would take the train into Chicago with my mom and grandma and go window shopping, stopping to marvel at the beautiful window displays at Marshall Fields. Marshall Fields always had the best window displays. We then of course would go inside and look around Marshall Fields.  Window shopping and watching the beautiful displays with all their mechanical genius was great fun. I’d snuggle up to my mom and we’d marvel at the beauty of it all. Here is a great article, “Christmas Holiday Windows on State Street: A Chicago Tradition.” It has wonderful photos of Chicago holiday windows. 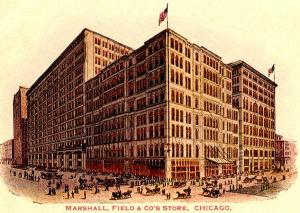 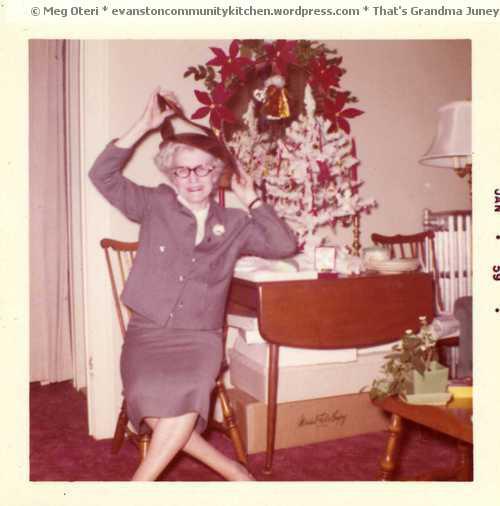 I wish I could go back in time and ask my grandmother a million questions.

I do remember asking her when I was nine years old, as she sat with her legs crossed like she has in the photo, on the tan plaid couch in our living room with brown thread stitching, “Why do your boobs sag, Grandma?” I remember being very curious why they hung so low.

She was so kind. She laughed a little at my blunt nature and smiled, as if she understood my bluntness from her own experience. She was a straight shooter. I loved that about her.

My dear Megan, “We had to wear corsets when I was young.”

“What are corsets?” I asked curiously.

“They were uncomfortable, but squeezed everything in. You should be happy you will never have to wear one.”

I miss my grandma, but I feel closer to her as I research her life and her mother’s life through The Community Kitchen. My mother recently passed away. She was laid to rest at Arlington National Cemetery July 1. Her inurnment ceremony was beautiful. Her ashes were joined with my father’s who passed in 2003.

I will be going to Evanston this week to conduct on-site research at the Evanston History Center. I received a Regional Artist Project Grant funded through the North Carolina Arts Council, Pitt Council Arts Council, and the Wilson Arts Council for travel expenses. I am very excited to be able to go to Evanston and all the places my mother, grandmother and great-grandmother stepped before me.

This article is a great link (The History of Meatless Mondays) by Katherine Spiers about the history of food conservation during WWI. As you know, if you follow this blog — the Evanston Community Kitchen sprang from a Evanston Woman’s Club food conservation project (the Food Conservation Committee of the Woman’s Club). My great-grandmother (Elizabeth Hawley Odell, also referred to below as Mrs. James Odell) was one of the three committee chairwomen, along with Mrs. Dawes and Mrs. Kingsley. At the time, my grandmother was 19 years old and living in Evanston.

If I could travel back in time, I would shadow both my grandmother and great-grandmother during this time period. I would love to watch my grandmother’s hands as she helped prepare canned fruits and vegetables from local victory gardens.  These historical moments are what I will be researching when I travel to Evanston this summer.

“During World War I (1917/8), through the Food Conservation Committee of the Woman’s Club, she helped to found (with Mrs. James Odell and Mrs. Homer Kingsley) and manage a community canning kitchen, which produced almost 7000 jars of food over a summer. This Conservation Committee further put on food demonstrations for women at Schools of Domestic Sciences all over the city and trained volunteers to teach others; they also wrote to merchants about complying with the conservation order of the United States, especially to find substitutes for wheat, meat, fat, and sugar.” — Evanston Women’s History Project Database (Helen Palmer Dawes), Evanston History Center 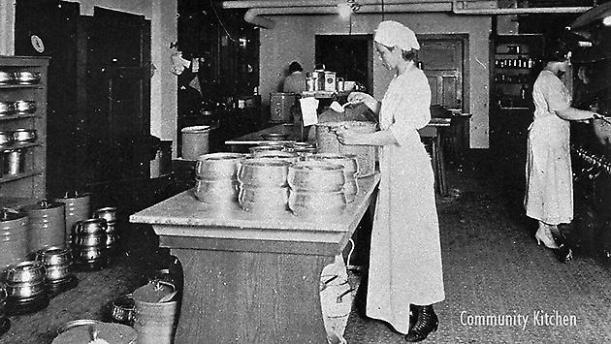 “This Thursday (April 4, 2013) is “Preserving the Family Table,” a presentation covering the fascinating but mostly unknown story of the Community Kitchen.” — Evanston History Center Facebook page

Admission is $10 to the event at the Evanston History Center, located at 225 Greenwood St., Evanston, Illinois 60201, inside the beautiful Dawes House. Event is free for EHC members.

“April Under the Buffalo

Learn about the woman-run cooperative housekeeping venture, the Evanston Community Kitchen, founded as a canning kitchen during WWI. At its peak, the kitchen produced hot dinners in state-of-the-art facilities and delivered up to 500 meals per week. Billed as a service of “convenience” for housewives and young single businesswomen, the Evanston Community Kitchen can also be seen as a response to the anxieties felt from shifting gender roles and class relations after WWI.” — Evanston History Center website (http://evanstonhistorycenter.org/events-programs)

There is a video below of a panel on Marion Cunningham from the New School’s Food Studies Program panel series, Culinary Luminaries.

Description: Marion Cunningham (1922–2012) started her professional career at age 50 after taking a cooking class with James Beard. He was so impressed with her cooking that he hired her as his assistant, a position she held for the next eleven years. On Beard’s recommendation, Random House selected Cunningham to edit the 13th edition of The Fannie Farmer Cookbook (1979). Its success inspired Cunningham to write her own cookbooks, including two for people who have never cooked before. Her dedication to home cooking led former Gourmet editor Ruth Reichl to proclaim, “If Beard was the father of American cooking, Cunningham became its mother.” Speakers include Judith Jones, senior editor and vice president, Knopf; Laura Shapiro, author of Something from the Oven; and Anne Mendelson, author of Stand Facing the Stove. Moderated by New School Food Studies faculty member Andrew F. Smith.” – Source: Andrew Smith, New School Food Studies Faculty Member 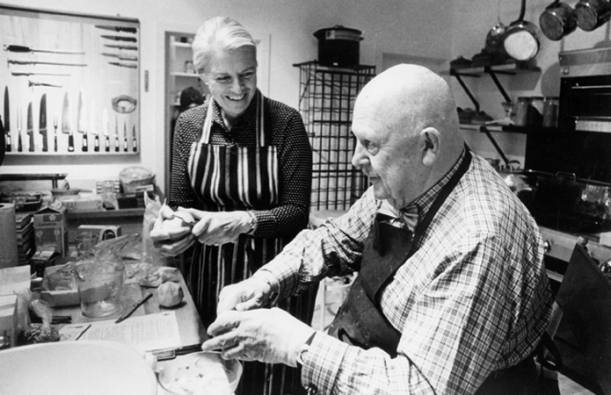 Marion Cunningham was an extraordinary person. Her simplicity though and ability to get people to believe in their own cooking abilities and skills set her apart. She was a humble woman and overcame many obstacles before becoming a food icon. She was an extreme agoraphobic and rarely left her home. She was also an alcoholic who quit drinking at the age of 45.

In the New School panel, Laura Shapiro shares a story of Marion confronting her agoraphobia by flying to Los Angeles with two of her closest friends; they sandwiched her with friendship and support, holding both her hands the whole time on the airplane as they all flew from San Francisco to Los Angeles for lunch. Can you imagine the fear Marion had, not only about leaving her safe surroundings,  but also getting on an airplane?

At 45 years old,  this was the turning point for Marion. She came back from her trip to Los Angeles with a fresh perspective. She also quit drinking.   Judith Jones illuminates on this in the panel, “As I heard the story, she got back, walked into her house, said to her husband and two children, ‘I’ve just been to Los Angeles.’ And they almost fainted and then she said fondly, ‘And I’m not going to drink anymore.’ She just knew it was eking away her life and she wanted to do more.”

Shortly after flying to Los Angeles and quitting drinking, she went to Oregon to study with James Beard. She soon became his assistant and worked for him for eleven years. Then Random House needed a cookbook writer to overhaul the outdated cooking bible, The Fannie Farmer Cookbook. This is where Judith Jones came onto the scene with her keen vision for talent and editorial skills.  You will have to watch the panel video to hear Judith Jones speak about how Marion became the writer, having never written a word before.

I was so moved by this panel (I watched it online) that I transcribed some of it. It makes me wonder if my great-grandmother, Elizabeth Odell or grandmother, Elizabeth Odell Welch crossed Marion’s path. Perhaps my grandmother knew Marion.  Perhaps my great-grandmother and The Community Kitchen were an inspiration for Marion. The Community Kitchen grew from the same issue Marion promoted: preserving the family meal.

“Yes, I think using your hands is the answer.” — Marion Cunningham

“She believed in ordinary home cooking done really well because it had saved her life. She believed it could save everyone’s.” — Laura Shapiro

“Marion was certainly a late bloomer. What really makes a food writer? For one thing we didn’t have such roles in the 19th century into the 20th century. The cook was the cook and not necessarily a writer. But with Marion, the very fact that she was self-taught — she did have a wonderful  Italian grandmother. She learned by doing and observing and loving it and as you (Laura Shapiro) point out, it did save her life because it was that turning point when she was 45 years old and her birthday. As I heard the story, she got back, walked into her house, said to her husband and two children, ‘I’ve just to Los Angeles.’ And they almost fainted and then she said fondly, ‘And I’m not going to drink anymore.’ She just knew it was eking away her life and she wanted to do more.” — Judith Jones, Vice-President and Senior Editor at Knopf (Editor for Julia Child and Marion Cunningham)

Judith Jones is an icon. I enjoyed hearing her speak on this panel. Judith also rescued The Diary of Anne Frank from the reject pile.

“Home cooking is a catalyst that brings people together.” – Marion Cunningham

Judith Jones talks about Marion cooking on Julia Child’s show, touching and packing the ingredients with bare hands. Julia Child questions Marion in her unique voice and tone, “Use your hands?”

Graceful, elegant, and calm, Marion replies, “Yes, I think using your hands is the answer.”

You can watch Marion and Julia make Buttermilk Crumb Muffins in the video below.  I have always been moved by people who overcome life’s obstacles and use their struggles as a catalyst to build a better life and teach others that we are not alone. Marion taught people that we are not alone, but connected through food and story. Food is a way to heal and Marion healed through cooking. It just goes to show how much story is in the food we prepare, eat, and serve our families and friends.

Here is a link to an interview with Marion on NPR titled, Marion Cunningham’s ‘Lost Recipes’ Cookbook Author Wants to Bring Americans Back to the Kitchen.

It Takes a Village … to Raise (and Maintain) a Building.

via It Takes a Village … to Raise (and Maintain) a Building. Click on the link to read about the history of the Woman’s Club of Evanston.

“In 2013, the Woman’s Club of Evanston will celebrate the 100th anniversary of the building of their clubhouse, so prominently featured at 1702 Chicago Avenue in Evanston.” — From the Evanston History Center Blog.

The Community Kitchen started in the basement of the Evanston Woman’s Club (now called the Woman’s Club of Evanston) in 1918.

Women in the kitchen and history in the making. Food = Story.

© Megan Oteri and Evanston Community Kitchen, 2017. Unauthorized use and/or duplication of this material without express and written permission from this site’s author and/or owner is strictly prohibited. Excerpts and links may be used, provided that full and clear credit is given to Megan Oteri and the Evanston Community Kitchen with appropriate and specific direction to the original content.